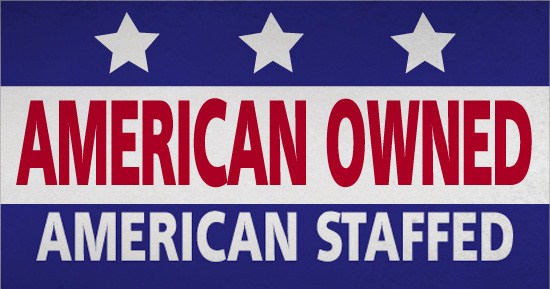 In the storefront of St. Tropez Nail Spa in Fairview, Texas, lies a sign that reads “American Owned, American Staffed”. Salon owner Diana Casey told WFAA-TV’s Stave Stoler that "This is a business decision. It's just letting people know I'm American, and I speak English." Her sign has caused an uproar in the salon community and has the potential to seal a permanent divide between Asian- and non-Asian-owned salons.

I won’t go so far as to say she’s racist. She is merely trying to promote her business in a sea of “potentially non-American-owned” but mostly Asian-owned salons. It’s about showing your patriotism, right?

Karen Nguyen Cortez, a manager at her family’s beauty supply store, believes otherwise. “This isn't a sign about patriotism, she's hiding behind the word ‘American’ and she is misusing the definition of ‘American’ to get her point across,” Nguyen says. Casey’s underlying point is that she is not an Asian salon.

My immediate reaction to the sign was, “Wait a second... I’m American, too.” My family and I hang our American flag out front during holidays and attend 4th of July and Veterans’ Day commemorations to pay respect to the American soldiers who died and fought for our freedom, a freedom that the Vietnamese-American community understands and cherishes deeply. April 30th marks the 38th anniversary of the Fall of Saigon, when South Vietnam fell to the Communist regime. The events that took place that day are the reason why the Vietnamese-American community exists as it does today. To even have to do a double-take and question my own nationality, well, maybe that says something about me, about how I always seem to be reminded that I’m a minority, American and all, and will forever have to prove what should be accepted.

Vietnamese salon owners with beautiful salons who follow all the state board rules must also fight to compete in this market against salons that don’t follow the rules. But they don’t rub it in that they are “American Owned, American Staffed” because they have been in the position of new immigrants. They were once refugees who fled a war-torn country with their lives and nothing else. They have overcome language and cultural barriers, and they can see how these words, especially in an industry where your nationality may be questioned based on your appearance or accent, can seem threatening toward those who are not yet American citizens. Two out of the three Asian-owned businesses in the vicinity told Stoler that the sign made them feel uncomfortable. Isn’t that enough to change the verbiage of your sign?

If you are not Caucasian, your ethnicity and nationality can automatically be questioned, and that is the problem with this sign. This salon owner’s “business decision” to put up this sign will help her business as she continues to receive overwhelming support from her clients. Controversy sells, after all, and I’m glad she has found her ideal clientele.

But this sign backfires on the entire nail industry as a whole. It further splits the gaping hole between Asian and non-Asian salons, whether it meant to or not. The proof is in the comments left on Nail Talk Radio's Facebook page on the issue. One reads: “I wish there was a website clients could find non-Asian salons...” The sign forces Asian-owned salons to question their place in American society, whether they are American or not, and it backfires on hard-working Vietnamese-American-owned salons who have had to prove themselves as quality salons.

In order for our community to rise above, we must steer clear of labeling, name-calling, and promoting our businesses in a light that can be mistaken as intolerant, especially in an industry where there is already tension between sides.

> Continue to provide excellent service to your clients. Your clients appreciate it.

> Continue going out of your way to let clients know that your tools and pedicure tubs are disinfected.
> Continue to stay on top of the newest products and trends.

By continuing to promote your salon with these points, you will succeed. Nail tech and CND education ambassador Heather Davis says it best, “I would rather market myself to speak to my personal training and background, because what I look like and how I speak do not define me as a person or as a nail professional.”

The United States is built upon the hard work of immigrants and the richness that each ethnic and social culture contributes. The Vietnamese community has helped structure the nail industry into what it is today. As you continue to improve yourselves and your businesses, together we can continue to build and strengthen this industry, American and all.